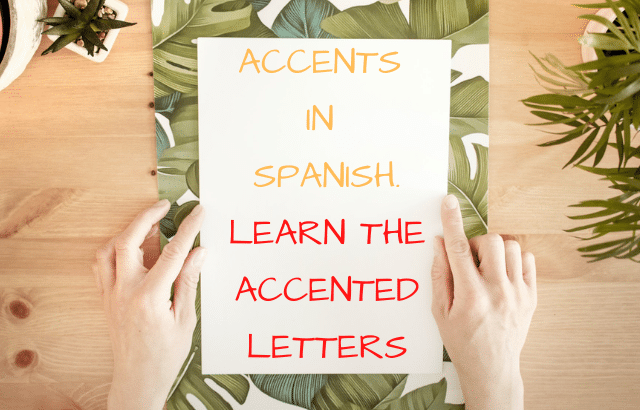 In this article, we will be looking into one of the most misunderstood mysteries in Linguistics: accents in Spanish. However, this article and some exercises will get you skyrocketed to the extent that you’ll become a spelling hero in a New York minute.

You have seen all kinds of words with accents in Spanish all even in the most unexpected places but trust me, once you get the basic rules, some musical sense will help you out with the exceptions. Spanish is not as phonetically sensitive as English, in which by applying stress on different syllables you obtain innumerable ways to phrase them out that are valid depending on the regional variety. Nonetheless, Spanish is phonetically far more streamlined than English.

By now, you must have heard about that little thing known as “tilde” in Spanish. “Tilde” is the term we use when it comes to the graphic representation of words with accented letters in Spanish but, hey, keep this in mind: while all words have an accent, not all of them feature it in the writing as a “tilde”. And the purpose of spelling rules is precisely to help you out with it, not make your life harder.

TYPES OF WORDS ACCORDING TO THEIR ACCENT

Try clapping harder on the underscored syllable in bold for the following:

Notice a pattern? Sure: all of them are technical/scientific/academic terms. But also, the stress is applied on them in a regular manner. We call these words esdrújulas (with the accent on the third-to-last syllable).

Accents in Spanish become just a tad bit trickier with the words we accordingly call llanas and agudas.

Additionally, we need that you keep an eye on the fact that certain Spanish terms end in -s, -n or vowel.

The vast majority of Spanish words has the stress on the syllable before the last. This means that the language is mostly made up of those called llanas. You can get confused if not aware that, when adding -s/-es (masculine) or -s/-as (feminine) to shift singular words in their plural version, the stress will not shift along with the word: it stays exactly where you originally found it.

As you can see, casa is llana in both its singular and plural forms.

Mejor is aguda (the last syllable carries the accent); by preserving the position of the stress when the plural ending is added, mejores becomes llana.

Same case as above. Now, what about canción and jamón carrying the tilde, whereas mejor doesn’t? And you get the same result when you do:

Martín is a person’s name; Martínez is the last name that stems from it and means “Son of Martin” in a similar way as do Mac, Mc or O’ in certain British family names. But, hmm, in both instances there is the tilde. Something starts to look fishy around here.

Andaluz gets the stress on the last syllable, but you won’t place a tilde there, neither over the plural variation.

So, what’s going on here? Well, it is time to take back the -n, -s, vowel ending info and deploy it into battle. Let us determine when the tilde is placed through a table:

WHEN THE DIPHTHONG BREAKS

As we learn Spanish, here’s when you will need the aforementioned musical sense and an on-the-fly knowledge about vowel types.

As we hope you still know, vowels are a (as in cat), e (as in pet), i (as in mint), o (as in thought) and u (as in put). They are then subdivided into open (a, e, o) and closed (i, u). In Spanish, this is vital as to the creation of diphthongs (a syllable where two continuous vowels blend together).

Diphthongs are possible by combining these types of vowels:

Diphthongs never come out of two open vowels together:

This is the rule. But, in words such as:

Take a closer look. What kind of vowel carries the accent? You got it right: it is a closed vowel. Then, the diphthong breaks, creating two separate syllables (consider the closed vowel got a promotion or upgrade by applying stress on it, as though becoming an open vowel itself). We signify this by placing the tilde on the stressed vowel.

NO MORE STRESS ABOUT ACCENTS IN SPANISH FOR YOU

Before calling it a day, we hope you have acquired a knowledge that not many Spanish native speakers can boast of being proficient at. Turn this knowledge into a skill: it is easy with practice and, if you are a visual learner, you should not face unsurmountable challenges with accents in Spanish. Way to go!

Would you like to know more Spanish grammar? Discover how to easily conjugate the verb to be in Spanish!

Learn the future tense in Spanish effortlessly with examples