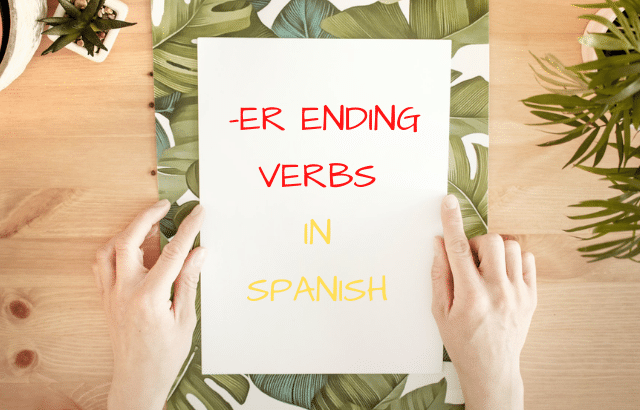 As important as the –AR ending verbs, today we will take a look at the –ER ending verbs in Spanish. With them we start navigating strange waters, since there will be some irregularities, nothing to run scared off.

Since we intend to learn Spanish, just keep in mind it suffices not to forget to attach the appropriate ending to the stem according to the verb’s grammatical doer (the one we also refer to as “subject”).

The number of the –ER ending verbs in Spanish is quite considerable and some of them are actually very important for daily life. We will show you some of them, each with its corresponding translation into English, in case they just came up to the tip of your tongue:

HOW TO CONJUGATE ER VERBS IN SPANISH

We remind you that usted/ustedes fills in respectively for tú/vosotros in many places of Latin America.

There are quite a few irregular verbs in this cluster. We will add them so you warm up to the idea that most of the times their irregularity is a consequence of very specific and phonetically recognizable rules.

WHY DO THE –ER ENDING VERBS IN SPANISH LOOK SO IRREGULAR?

An important detail about verbs like coger is: since g sounds differently when placed before -a and -o –as you usually do to conjugate a first person–, g is replaced with j to keep the way the stem sounds. Let’s see some examples of sentences with this verb:

In certains cases, like ofrecer, nacer, merecer, florecer, and other morphologically identical ones –the so-called inchoative or inceptive verbs, signifying the action of beginning or becoming–, the conjugation (especially the first singular person) is very particular: instead of ofrezo* (as one would logically take out), we obtain ofrezco. The same thing occurs in every single inceptive verb.

Do you remember the explanation about soltar (let go) in the –ar verbs article? This can happen with verbs such as poder, soler, and oler.

Here you are again the historic explanation: some sole Latin vowels (some –es- and –os-) widened out when in a stressed/accented position: -e- became -ie- and -o- went to sound -ue-. The Latin vowels turned into diphthongs in many words (corpo>cuerpo [body], centum>ciento [a hundred], serra>sierra [saw]). Just because they were so important, time did not exempt verbs from going through such a transformation. So, whenever the -o- in poder or soler is stressed, it splits into an -uE- (the -e- carries the accent, whether visible or not based on the Spanish spelling rules we have studied in the article about accents in Spanish. This means that the forms without the diphthong simply have the stress on some other vowel (podEmos, podÉis).

When it comes to oler, in instances like huelo and hueles the same phonetic rule is due. But this verb has an additional rule that makes clear why at times you see an initial h-. However, the added h- is pretty much an ornament: it does not sound, and it won’t change the meaning of the word. There was a time when the h- was not placed there, but as the language got itself polished out over the centuries, it was decided an initial ue– was way “awful” to be kept in that fashion. The h- also represents an element that got lost, in this case the original Latin o-. It turns out to be the same in ovo>huevo.

We hope that, as usual, this helps you learn how to conjugate –ER ending verbs in Spanish. Now, it is your turn to deal with some exercises that, you will see, will be really helpful.

Now that you know everything about the –ER verbs in Spanish, take a look at the -AR ending verbs!

30 face parts in Spanish you can learn with exercises